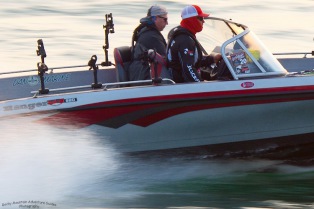 At South Dakota Fishing Guide, we are constantly trying new lakes for our clients. For an update report on fishing www.outdoorsweekly.com.

September 15, 2022 the fall bite is here! We are finding good walleye numbers shallow and deep. Perch bite is starting to fire but the numbers appear to be down. Crappie and northern pike are on fire!

July 17, 2021 the bite in Northeast, South Dakota continues to fire in the shallows or weed beds pulling live bait.

On the Missouri river, Lake Ohae  continues to produce numerous big fish and small fish in 15-25 feet of water.

September 29th, 2020 the bite is on fire!! Perch and bass are biting most lakes. The walleyes are biting early mornings and evenings.

Jan 9, 2020 we have good ice for atv and snowmobiles. Ice varies from 8-14 inches no truck travels yet. Fish has slowed down due to big front coming thru but still getting a few limits.

November 20th, 2019 we have ICE!! Guides found some good perch but we are still weeks out from guiding.

Sept 28, 2019 perch and walleye bite is starting to pick up with the water temps dropping below 60 degrees. Best bait has been minnows and a Gold Genz worm lure.

Jan 12, 2019 we have ice fishing sleeper shacks on the ice!! The bite is very good after dark with some nice perch as well during the day.

December 29, 2018 the perch bite and walleye bite has been great! some limits coming off but travel is tough. Atvs and snowmobiles are best now. Tungsten and spikes seem to work best. Snow pack on the lakes is 8-10 inches.

March 5, 2018 the perch bite is finally picking back up with some limits starting to come! we will have our Ice fishing shacks/ sleeper shacks on the lakes for another week! We hope to be ice fishing till end of March!

November 10, 2017 we have ice!! The Lakes are just starting to freeze we hope to be on the ice fishing by December. Also the size limit on lake Poinsett  the min of 15 inches is pulled so Jan. 1 2018 this will go into affect! we will have day and sleeper houses for rent on there again so book year!!

October 23, 2017 the perch bite has picked back up along with walleyes. We are finding lots of limits of walleyes sizes are 12-18 inches with a few over 20 inches. Most walleyes and perch are in 3-8 foot of water vertically jigging or casting a jig and minnow.

September  28, 2017 the bite is ON!! The water temps are pushing 60 degrees on most lakes and we have a few lakes putting out JUMBO PERCH!! THe lakes producing are grass lake, Swan Lake and Bitter. We have some nice walleyes coming out as well plus some nice white bass as well!! we have openings still this fall.

April 7, 2017 sad news in the South Dakota most of  non-meandered waters are closed to fishing now.

What this means now is you will need to contact someone before fishing or get permission from all land owners. With that being said we still have some amazing fishing. Right now the guides are getting alot of walleyes, crappies, bass and pike. Best is a jig and a minnow.

Feb 27, 2017 the perch are starting to finally go again with late ice. The ice is fine on alot of the smaller deeper lakes but use common sense if it doesn't look good stay off. We are seeing limits of nice jumbo perch 10-15 inches and nice eater walleyes 14-19 inches. The best ice is north of 212 highway.

October 24, 2016 finally the perch bite has taken off with the colder temps we are seeing lots of perch, walleyes and crappies being taken. The best method has been vertically jigging with the new hippy bleeder perch producers tipped with a full minnow. Ice fishing is just around the corner make sure to book your sleeper and guided trips soon!!

August 4th 2016 fishing report. Very few lakes are going now for walleyes. We are getting some limits of walleyes but the fish seem to be deep or deep in the weeds. Pulling cranks or casting weedless lures seem to work the best. Perch now are starting to bite we have 3 lakes we are guiding on now that are putting out 10-25 keepers a day. Still not many limits but fun and good sizie perch. Pike are still strong on a few lakes most are 22-30 inches with a few over 36inches. The bite should pick up in a few weeks as the temps come down.

June 2nd 2016 walleye fishing is starting to take off now. As the water temps are pushing 70 degrees we are finding more weeds and more active walleyes near them. Poinsett, dry number 2 and thompson have all be hot lakes as of the last few weeks.

March 23, 2016 the ice is off the lakes and we are in boats!! Some lakes do have the docks in and the bite is doing well as it is pre spawn for walleyes now! Plus if you did not know South Dakota walleye season never closes. The guys are catching them on a jig and minnow or a husky jerk. We have a few openings for guided trips call us 605-201-7299.

Nov 2nd, 2015 the water temps are near 50 degrees and below the big walleye bite is on!!!! Shallow water has been best of the walleyes casting crank and jig and minnows from shore.

October 14th, 2015 perch bite has been good on Lake Poinsett and dry lake #2 using slip bobbers and minnows. Walleye bite has been picking up most of the bigger walleyes are starting to move up shallow.

September 7, 2015 the walleye bite has been up and down. Most of our walleyes are still shallow but many have moved out to 10-15 ft of water due to the cold front we had. Bitter and lake Poinsett have been two of the best bites this last week. Bitter lake is alot of sorting walleyes and lake Poinsett has been a great perch bite. Dry lake number 2 by willow lake has been very slow many walleyes are under 14 inches we hope the fall here will pick up the bite.

May 10th, 2015 the walleye bite has been great! The walleyes seem to be in the 3-7 ft of water on most of the lakes. Most fisherman are finding bottom bouncers and crawlers or leeches to be affective for walleyes now. With many cold fronts coming thru make sure to keep your boat moving slow as the walleyes are not as aggressive as we would like them. Most boddies of water the temps are 55-60 degrees. Pulling cranks seems to be still to early for that.

March 2, 2015 the perch bite is starting to pick up!! March 10 should be the start of the jumbo south dakota perch bite!! We have some spots open to chase some south dakota jumbo gold!!!

Feb 2, 2015 the bite on the shallow lakes like Whitewood, lake preston, brush, was very slow but the deeper water lakes like Sinai, Lake Thomspon and Poinsett were not affected as much by the cold front and were producing fish!! Sinai has been a night bite with lots of over 20" walleyes and some 10" perch. Lake THomsopn was on a hot bite for crappies, smaller walleyes and some 10-12" perch. Poinsett contiunces to be a jumbo perch lake if you can find them.

JaN 19TH, last weekend was a hit or miss but sunday the guides found a new lake full of Monster crappies and jumbo perch with a few nice walleyes.

lake Thompson one of our Rentals got a 29in walleye and released it.

Bitter lake continues to be a great lake for small walleyes and some nice perch. We have one guide open to guide this weekend call 6052017299.

January 8th this last weekend the perch bite was tough but our groups still managed a few keeper perch and walleyes on Lake Thomspon and Poinsett. Bitter lake has been great for 14inch walleyes and few perch but lots of sorting. This weekend the weather should help the bite remeber to use small minnows and down size your lures with cold fronts.

December 27th the perch bite was on fire last week but this week it has slowed down with the cold front it should pick up again next week.

Dec 8 perch are on FIRE we have had numerous guided trips fill with they limit of jumbos. Lake Thompson contiunces to produce good number of perch, crappies and walleyes along with Lake Ponsiett.

Oct 24, 2015 the bite is been a hit or miss but when the bite is on many monster walleyes and some Jumbo perch are being produced. Dry Lake and Lake Thompson have been the lakes of choice as of last few days. Lake poinsett just before dark casting Live targets in the shallows has been great for 20 inch plus walleyes and a few nice pike to mix in. Goose Lake is also one lake that has seen a few limits come off too.

August 30th 2014 perch bite is on Fire! Most of our lakes we are going are producing perch. Lots of 10 to 14 inches. Plus tons of walleyes! 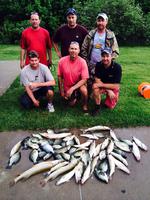 Amazing walleye, Crappie, Northern and White Bass bite in South Dakota as of May 31st!! 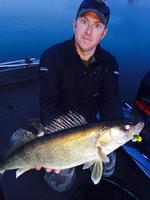 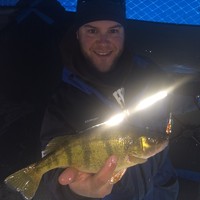 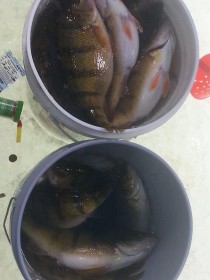 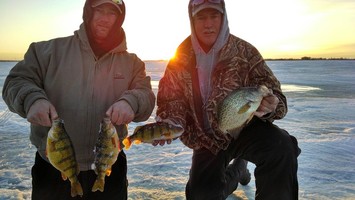 Clients each got a new personal best one big Crappie and one Big Perch!! 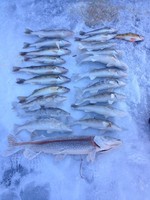 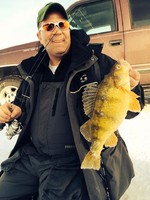 Where to Find Us:

Fish with Ted Takasaki and Jarrod Fredericks in a SnoBear!!!

We offer guided fishing trips in hard shacks no more dealing with wind!